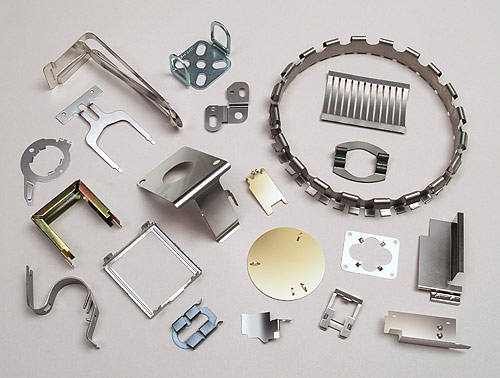 While manufacturers have long used an integrated stamping and forming operation called fourslide for its ability to produce complex parts such as those with involved forming, multiple bends, or elements beyond 90-degrees, the savviest are discovering the process beats traditional power press machinery on "straight stamping" jobs too. On light stamping jobs under one million parts and 25 tons, the fourslide process is proving surprisingly more cost effective than power press machines, while speeding product delivery and boosting market competitiveness.

Changing production in a changed world

Even though lots of manufacturers need stamped parts, today relatively few need runs of a million or more. Yet many manufacturers continue to use complex, high speed, power press/progressive die machinery for parts production. This was fine twenty years ago when production runs above a million were more common and contracts could last for years. But doing so today is like using a sledgehammer to swat a fly or a dump truck to haul a few pieces of furniture. It may get the job done, but at extra cost with less flexibility than required.

Times have changed with the trend toward greater customization, shorter product life cycles, smaller lot sizes, and higher material prices. None of these changes cater to power press's strengths, which only really come into play on production runs of about a million or more at high tonnage. With a typical tooling price of $20,000 and up, elevated shop rates due to capital costs in the hundreds of thousands of dollars, and extended production lead times, it's no wonder that more manufacturers are balking at the use of high speed power press/progressive dies on routine light stamping jobs.

As a cost effective alternative that can expedite production, savvy manufacturers are turning to the integrated stamping and forming operation called fourslide for light stamping jobs under one million parts and 25 tons. On parts less than 2" wide and less than 0.075" thick, the fourslide process had mostly been used for complex work such as that with involved forming, multiple bends, or elements beyond 90-degrees.

What makes the fourslide part-making process capable of cutting typical tooling costs to as little as $3,000, halving tooling lead times, and eliminating after-production adjustment to meet specifications is its unique integration of stamping and forming operations. The process begins with the raw material in flat strip form off a coil, which is stamped or blanked in the progressive die section of the fourslide machine, which is a fully functional but lighter version of the progressive die found in most power presses.

Where high-speed power presses can cost hundreds of thousands of dollars, fourslide machinery typically costs just a fraction of that, enabling greatly reduced shop rates. Fourslide production at up to 15,000 pieces per hour can be achieved depending on part size and complexity. And since the process typically starts with material the width of the finished part, it usually generates less scrap than power press machinery, so material costs are often lower as well.

When the Rochester, New York-based plastic injection molder Nordon Inc. saw an opening in the automotive market, it pounced. In order to capture a contract for heavy truck alternator contacts, it had to deliver overmolded metal product as quick as possible, at the lowest possible price, while meeting all quality specifications. To win the contract and successfully manufacture the product, traditional power press production was considered but passed over.

"For a million piece run, it makes sense to buy product from China by the container load, but that's not what customers want today," explains Paul Reed, a Nordon senior executive. "They won't accept three to four week lead times on product that must be readily available. They want smaller quantities, just in time delivery, and the ability to make changes as needed."

The company wanted to avoid the high tooling costs of power press, while minimizing the amount of copper and tin scrap produced. "The overmolded metal components equaled about 60 percent of the piece part price, so we needed a very cost efficient process."

Reed turned to Fourslide Spring and Stamping, Inc., a Bristol, Connecticut-based parts supplier specializing in the integrated stamping and forming parts operation called fourslide. The supplier gave Reed immediate feedback on part design review, including changes that could be made on the customer's original 3D model.

According to Reed, the company's quick tooling turnaround, reasonable price, flexibility of part revision, and ability to jumpstart production all helped to win the contract. The program's success has won additional business, which Reed feels traditional power press equipment would find difficult to match.

"To manufacture a half dozen electrical lead products, we could've easily spent $20,000 each in power press tooling," says Reed. "With fourslide, we were able to complete tooling for the entire program for under $20,000; that's about $100,000 in savings."

Just as important to Nordon was Fourslide's ability to cut about three weeks of production lead-time from what's typically an eight-week process. "Helping customers get product to market faster provides a real competitive advantage," says Reed. "It helps beat out rivals with faster response to changing market demands."

"So we can better position ourselves for today's smaller lot sizes, shorter product life cycles, and rising material costs, the fourslide process has helped us minimize our cost of tooling and material while speeding handling and operation," says Reed. 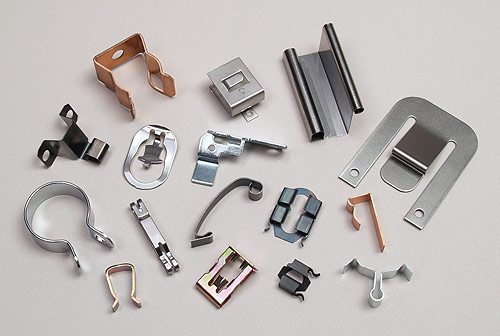 Expediting a product launch at the right price

In order to cost effectively launch a new product, Bisco Inc., a manufacturer of dental materials and accessories, found itself considering how to best manufacture a dental dispensing device requiring several flat metal stamped springs. When the company looked at traditional power press progressive die and fourslide machinery, they went with fourslide for a number of reasons.

"In our quantities, the typical progressive die tooling was too costly," says Richard Nagel, Bisco's Product Engineering Manager. "Since the product was new, we expected some changes during prototyping and development. But with progressive dies, you need to know exactly what you want; changes are cumbersome, and the whole sequence must work together."

Nagel found value in the simpler, lighter, more flexible fourslide machinery, and additional savings in consolidating production with one supplier, Fourslide Spring and Stamping, Inc., capable of hitting all delivery commitments. "We saved about 30 to 50 percent on our initial tooling and tooling revision costs by using fourslide over more complex progressive dies," says Nagel. "Even though the fourslide machinery is synchronized, it's easier to change sections of its tooling without affecting the whole. The savings we've realized amortizes right back into the price of the parts, which helps us stay competitive in our market."

As for quality, Nagel has been very satisfied. "Part quality and tolerances have been outstanding with no edge burrs or distortions," he says. "Whether for straight stamping or more complex forms, we've achieved the cost, delivery and flexibility we need using fourslide."

Though the fourslide process is increasingly used for "straight stamping," it can be used on a wide variety of parts from precision metal stampings, flat springs and wire forms to complex forms. When this occurs, the strip of material passing through fourslide's light progressive die is then fed into the forming section of the machine, where four tool carrying slides approach the part from the north, south, east, and west, forming the material around a center tool or mandrel. The set-up of the machine cams determines the sequence of tool strikes.

Click here to view an animated demonstration of the fourslide manufacturing process.