Use of fourslide manufacturing process and upfront consultation with the vendor provide lessons for the launch of any new product.

What conscientious manufacturer doesn't undertake much planning before its new product begins its maiden voyage into the commercial marketplace? But while much of the planning emphasis often falls mainly on the design process and even marketing, too little gets placed on the actual manufacturing of the product, to the great detriment of the project budget.

Yet, one small company managed to trim its cost for making a part by tenfold, simply by opting for a more economical manufacturing process and consulting with the part vendor. The collaboration also netted a lower per-piece cost for the part, despite revisions. The experience presents a model that other manufacturers of any size can follow whenever introducing a new product.

Making a great idea for less

Like so many other engineering-driven outfits, Autotether, Inc. of Chester, Connecticut suffered no shortage of design innovation. The company's founder, Anthony Viggiano, invented a unique, multifunctional wireless alarm for boating safety applications that protects up to four crewmembers of any motorized watercraft. If someone falls into the water, the communication link between the host receiver (mounted to the boat ignition) and the client sensor (worn by each individual) breaks. Within 1.5 seconds the host device automatically sets off an alarm and switches off the engine.

As the only active "real time" monitoring device offering instant response to a "man overboard" situation, the product's future looked promising. But when time came to build the product in production quantities, manufacturing costs threatened to scuttle the profit margin.

"Our device is fairly complex, and so are its components," says Viggiano. "For the initial prototypes we employed a stock battery contact made of coil spring, but these wouldn't hold up so we needed something custom-made."

After designing a new part, Viggiano set about finding a way to manufacture it, only to encounter a prohibitively high tooling cost.

"Many engineers will design something entirely functional for their product, but that is very difficult to make," points out Jim Richards, director of marketing for Fourslide Spring and Stamping, Inc. of Bristol, Connecticut, an ISO 9001:2000 certified manufacturer of precision flat springs, metal stampings, contacts, and wire forms. "They get unhappily surprised at the NRE cost of the tooling required to make the part, as well as the ongoing cost of the part itself?which is often affected by the manufacturing process as much as by the chosen material."

Like many manufacturers, Autotether's team originally considered the traditional employment of a progressive die to make their part.

"We looked at some domestic and off-shore vendors, but they wanted tens of thousands of dollars for a progressive die; way too much for our modest budget," recalls Viggiano.

It was then that one of Autotether's project engineers brought the fourslide manufacturing process to the attention of Viggiano. 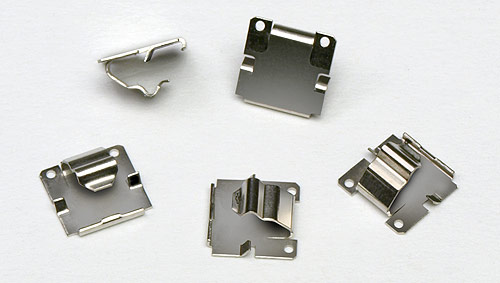 Named for the four tool slides that perform stamping and forming operations, the process begins with raw material in flat strip form off a coil, which is stamped or blanked in the progressive die section of the fourslide machine. The strip then feeds into the forming section, where four tool-carrying slides approach the part from the four cardinal compass points, forming the material around a central tool or mandrel. The set-up of the machine cams determines the sequence, timing and number of tool strikes. Check out an animated demonstration of how this process works.

Because the four forming tools are simply tool blocks carried by the slides, they can be machined in much less time, and for a fraction of the cost of complicated power press dies that must include actuators within the tool itself to perform the forming functions.

"As opposed to the power press tools we were looking at that ran $40-50,000, the fourslide manufacturing tools came in at one tenth that amount, just $4-5,000," says Viggiano. "This savings greatly reduced our up-front capital investment."

Yet, further collaboration with its vendor played an equally important part in helping Autotether trim its costs before production.

"We went through several iterations with Tony, as there were extra features that he wanted" explains Richards. "At first we said, 'Here's what it is going to cost, as called out in the design.' But then we started reviewing it and making suggestions that could save him a lot of money. We ended up compromising so that he got what he wanted from a performance standpoint, but at a greatly reduced tooling cost and with a lower piece price."

Such a consultative approach pays off for almost any new-product development.

"Oftentimes, a manufacturer will put out an RFQ for a design that is quite doable, but there will be a particular feature on it that may be of minimal value, and the design engineer doesn't realize that that particular feature will significantly drive up the manufacturing cost," says Richards. "In other cases, we've seen engineers who will do a whole string of calculations on what the deflection of a spring should be, but devote zero consideration to the manufacturability of it."

"The better approach is to talk with the part vendor during the design phase," continues Richards. "They can make recommendations as to part form, for instance, that will reduce the need for expensive stamping tools in favor of a single cut across a roll of material the same width of the part. Such a change also reduces material costs because less gets wasted."

To reduce manufacturing costs even further, any collaboration should extend all the way through the prototype stage to first-article runs.

"We had to make a couple of revisions, and the Fourslide guys were right on top of it," says Viggiano. "It turns out it wasn't enough to get alarmed about; only around $1,000. If we had a progressive die, a change would be more like $10,000."

Dave Rizzo is a freelance writer based in Fullerton, California.