Domestic Fourslide Stamping to Save Hundreds of Thousands of Dollars 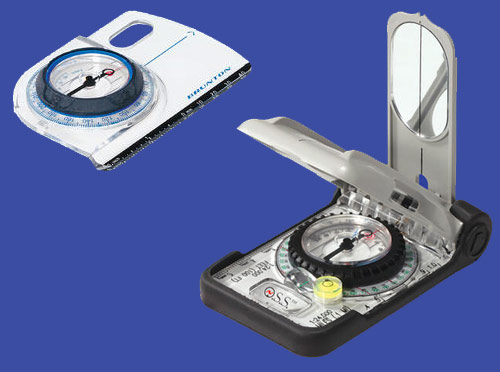 Fourslide was able to create combination tooling that accommodated both types of needs for less than $6,500. Using conventional stamping methods, such as power press, progressive die, would have required separate tooling for each needle type, at many times the cost.

In the early 1980s, when Brunton Outdoor was stamping out compass needles on a 50-ton press using a conventional steel punch and die, the tooling was wearing out much too quickly.

"The chrome-cobalt steel alloy we are punching was really abrasive and wore out the tooling prematurely," explains Hank Iden, an engineer at Brunton Outdoor, a Riverton, Wyoming-based manufacturer of quality outdoor lifestyle equipment, with a history that dates back to 1894, when D.W. Brunton created the pocket transit, a compact precision compass that freed outdoorsman from the bulky equipment of the time. "We sharpened the tooling as much as we could, but it just didn't last. After 30,000 pieces the tooling was at the end of its life."

As a cost effective alternative that can expedite production, Brunton Outdoor, like a growing number of pro-active manufacturers, turned to an integrated stamping and forming operation called fourslide that is surprisingly efficient for light stamping jobs under one million parts and 25 tons.

"Since choosing the fourslide process for straight stamping in the early 1980s, I estimate that we've saved hundreds of thousands of dollars," says Iden. "Success is all the sweeter when it's all made and assembled right here in the U.S."

The fourslide part-making process was previously used mostly for complex work such as that with involved forming, multiple bends, or elements beyond 90-degrees on parts less than 2" wide and less than 0.075" thick. Now more manufacturers are choosing the process for "straight stamping," to profitably ramp up new part production, slash part tooling and revision cost, and flexibly improve quality and lead-time.

What makes the fourslide part-making process capable of cutting typical tooling costs to as little as $3,000, halving tooling lead times, and eliminating after-production adjustment to meet specifications is its unique integration of stamping and forming operations. The process begins with the raw material in flat strip form off a coil, which is stamped or blanked in the progressive die section of the fourslide machine, which is a fully functional but lighter version of the progressive die found in most power presses.

Where high-speed power presses can cost hundreds of thousands of dollars, fourslide machinery typically costs just a fraction of that, enabling greatly reduced shop rates. Fourslide production at up to 15,000 pieces per hour can be achieved depending on part size and complexity.

Iden relied on Fourslide Spring and Stamping, Inc., a Bristol, Connecticut-based parts supplier specializing in the integrated stamping and forming parts operation called fourslide. The supplier implemented a carbide punch and die so tooling would cut cleanly and last longer.

"With the fourslide carbide tooling, we got hundreds of times longer tooling life than with conventional tooling," says Iden. "The tooling made about one million compass needles for us before we retired that design. Another set of carbide tooling made in the mid-1980s served almost three decades before recently being retired."

Why would Brunton Outdoor choose the fourslide process for straight stamping of parts that extend to a million or more? "The fourslide parts are economical, easy to modify, made in the U.S., turnaround quickly, and meet our required design specs the first time," answers Iden.

Typically, when you are comparing the fourslide process with another process, you are comparing it with a power press. Fourslide tooling will range from roughly $3,000 to $10,000 – depending on the complexity of the part and amount of work required. In contrast, the cost of power press progressive die tooling usually ranges from 5-10 times that figure, starting at $15,000 to $20,000 and can go much higher.

Because of the high cost of progressive die tooling, many stampers go offshore for die manufacture. While going abroad may appear less expensive, the real costs of long delivery, communication problems and quality issues can more than offset the perceived savings. Any changes to the part requiring tool modifications can be a nightmare.

In the case of fourslide tooling, both the original tooling and any subsequent engineering modifications are far less expensive and can be created domestically far more quickly than those for power press dies, particularly those manufactured offshore.

"Where offshore delivery of powerpress stamped parts can often take 12 weeks or more, domestically stamped parts using the fourslide process can be delivered as fast as four weeks," says Jim Richards, Director of Sales & Marketing at Fourslide Spring and Stamping. 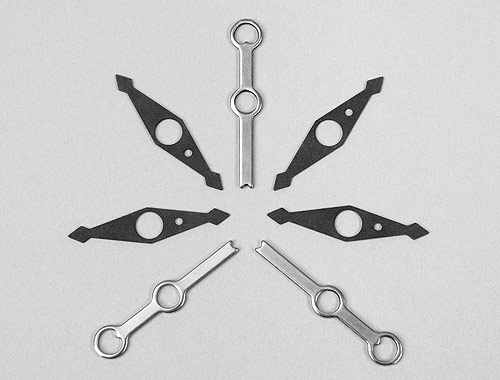 The latest project required the manufacturing of two types of compass needles, depending on whether the compass was sold in the northern and southern hemispheres, which have different magnetic properties.

"It's important to be skeptical of "low price" stamping dies, particularly those made offshore," cautions Richards. "These dies often employ one piece construction, which necessitates complete replacement in the case of damage or design change. At Fourslide, our dies are designed and built modularly, allowing for replacement, repair, sharpening or modification to specific segments of the die, thus greatly reducing cost. Over the life of the tool, these savings can be significant."

According to Iden, after Brunton Outdoor's initial fourslide tooling cost, the company paid nothing more for tooling, other than for design changes, even for tooling that was used for decades. The flexibility of fourslide tooling proved very cost effective on a recent project.

"Our latest project required the manufacture of two different types of compass needle, depending on whether the compass was sold in the northern or southern hemispheres, which have different magnetic properties," explains Iden. "Because of the modularity of their process, Fourslide was able to create combination tooling for us that accommodated both types of needles for less than $6,500. Using a conventional stamping method, such as a power press progressive die, would have required separate tooling for each needle type, at many times the cost."

Iden also credits his fourslide manufacturing partner for expediting the project's prototyping process. "The electrical discharge machine (EDM) work they did for us during the north-south hemisphere compass needle project helped to create a prototype and tooling that was right on tolerance the first time," says Iden. "As an added plus, they store our expensive and valuable compass needle material onsite at their manufacturing plant, which frees up storage at our own facility and speeds product turnaround."

"When people ask me why we stay with the domestic fourslide process instead of offshoring, I tell them it's for fast, accurate, economical, easily modified, straight stamping of parts," concludes Iden. "When you can buy a superior product for less right here in the U.S., it not only makes sense but also it's the right thing to do."