Fourslide says its unique process is best suited for the changes in the manufacturing industry. 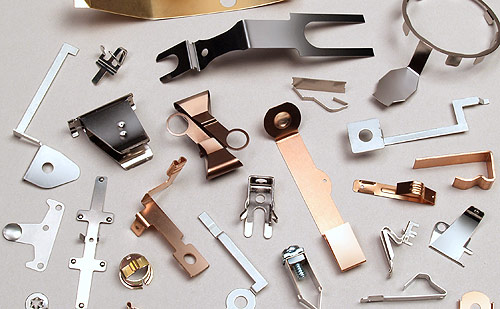 Director of Sales and Marketing Jim Richards says Fourslide Spring and Stamping Inc. doesn't try to be a "jack of all trades." But when the company utilizes a process as flexible and cost-effective as the "fourslide" technique, it doesn't need to be. Even though the company concentrates on this one process, it has been able to carve a niche for itself in the Northeast contract manufacturing market.

"We've chosen a small discipline and dedicated ourselves to it, and believe that we're the best at it," Richards says.

The fourslide process involves using machines with a progressive die and four tool slides that stamp and form metal in sequence. For example, the fabrication of a small but complex metal clip is accomplished by first feeding strip metal through a progressive die that stamps the basic shape out of the metal. This is then fed as a strip to the center form, which is surrounded by the four slides. After cutoff from the strip, the part is formed around the center form by multiple strikes from the toolslides, then ejected into the parts catcher. Among the parts that can be fabricated using this process are flat springs, metal clips, contacts, connectors and terminals.

This process can create complicated forms faster and more efficiently than other forms of manufacturing. Richards says this makes Fourslide Spring and Stamping a viable alternative for clients looking for smaller lot sizes than are typical for the industry. "We do take on challenges that other companies won't," he says. "The very nature of our process is we're more agile and less expensive on the print end, and I think that puts us in a good competitive position."

Along with the benefits provided by the fourslide process, Richards says Fourslide Spring and Stamping also has a number of other things going for it. As a small, family-owned business, Fourslide has the capability to do more for its customers than larger competitors. "We pride ourselves not only on being self-sufficient, but on our responsiveness as well," Richards says.

In the company's work force, turnover is virtually nonexistent, meaning Fourslide has a strong core of experienced workers in highly skilled areas of production. Richards says the company has literally hundreds of years of experience on staff. "The nice thing about it is, even with all those years of experience, we probably have a younger work force than most of our competitors," he says, adding that the company's average age for toolmakers and set-up men is around 45, a rarity in an industry where such positions tend to skew much older.

That will work to Fourslide's advantage in the future, Richards says, given the nature of the manufacturing labor pool in recent years. "It's not a new story that talent is harder to come by in manufacturing, and so that's certainly a challenge," he says.

The other obvious challenge right now for Fourslide is dealing with the impact of the recession. Richards says virtually all of Fourslide's customers saw their production fall off in the past two years, severely affecting the company's production.

The other side of Fourslide's business, however, is new products, and that side of the business is very good. Richards says 2009 was the company's best year ever for new orders, driven by customers reducing lot sizes for existing parts and the ever-shortening lifecycles of products. The net result of both sides of Fourslide has been that, despite the spike on new parts ordered, business has been off about 20 percent overall.

However, Richards says he remains optimistic about the future, because the same trends that are affecting the company's existing parts sales are the same trends that will make fourslide process more appealing for customers. The move to smaller lot sizes and shorter product lifecycles mean customers will be looking for a manufacturing process that is faster and more flexible.

"That's what we try to do every day," Richards says.