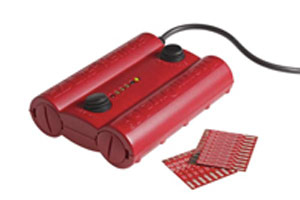 If you're sourcing stamped metal parts from overseas, you may be required to order far more than you really need, in addition to paying more for tooling and material.

If you're sourcing metal stampings from overseas locations such as China, you're most likely buying in large volumes, perhaps container loads. Chances are you're also buying into some potential drawbacks, including prolonged lead times, sketchy communications, expensive tooling, and the inability to stamp individual parts with complex shapes.

One of the most troublesome drawbacks of those large volume overseas purchases is an excessive inventory requirement, which not only affects your cash outlay for parts, but also means you may have those parts on hand far longer than necessary, perhaps exceeding the lifecycle of the product they support. In such cases, leftover parts are often scrapped and the economies-of-scale benefit of stamping parts overseas is thwarted.

Increasingly, U.S. manufacturers are becoming less prone to making large-volume parts commitments, particularly in segments where products go through more frequent upgrades, resulting in shorter life cycles. Many are finding that "fourslide" metal forming is a less expensive, more timely and flexible solution that can reduce their inventory investments with JIT deliveries from a domestic supplier, instead of taking months to receive from an overseas stamping operation.

Outsourcing parts from overseas often results in large volumes and expensive tooling. Conversely, fourslide production uses a series of relatively inexpensive tools that make component parts in volumes of even a few thousand at an affordable cost, more in line with many of today's manufacturers' requirements.

"Below the million [parts] mark, where many of us manufacturers reside, fourslide holds the advantage because of the very low cost of the tooling," points out Anthony Viggiano, co-owner of Autotether, Inc. (www.autotether.com), a Rocky Hill, Connecticut-based company that makes a unique, multi-functional wireless alarm switch for boating safety applications. "With the fourslide process, the cost of the tool isn't that great, so your capital investment isn't high."

Autotether has chosen Fourslide Spring and Stamping, Inc., an ISO 9001:2008 certified manufacturer of precision flat springs, metal stampings, contacts, and wire forms, as its supplier. Located in Bristol, Connecticut, Fourslide Spring and Stamping offers customers the material of choice, such as metal wire and flat strips of stainless steel, beryllium copper, phosphor bronze, brass, and high carbon steel. The company also offers finishes of electroless nickel, gold, silver, zinc, and other metals. Assembly and secondary operations, such as drilling and tapping, are also available from the company.

The fourslide process uses a sequence of stamping and forming operations on a single workstation, and can execute multiple bends, radii, angles greater than 90°, dimples and other features – before the part is ejected. This capability yields precision metal stampings, flat springs, wire forms, contacts, and other complex forms for a wide range of medical, electrical, automotive, aerospace, military, consumer, and industrial applications. The simplicity in producing fourslide tools, versus the time-consuming complexity of power press tools, translates into a significant reduction of lead times approaching 50% or more. Compared with overseas suppliers, the lead-time savings could be even greater. For more on the fourslide process, see Fourslide Process Offers Manufacturers Cost and Time Savings.

Jim Richards, director of sales and marketing at Fourslide Spring and Stamping, points out that a U.S.-based fourslide fabricator has the ability to support the manufacturer-customer all the way through the process, from design through finishing. "The communication that occurs at various stages, in early design, prototype, or production, requires a high level of involvement with the parts manufacturer," says Richards. "The possibility of miscommunications is usually far less with a domestic supplier, and that can be vital to achieving the desired end result."

The fourslide process benefits companies that want to limit their purchasing volumes without paying a premium. Those who are launching new products, customizing products for a special market, or anticipating future product modifications can place smaller orders from a fourslide house and still get quick turnaround.

ThermOweld® (www.thermoweld.com), a Tulsa, Okla.-based manufacturer of exothermic welding devices and materials used for welding heavy-duty grounding cables, went to Fourslide to manufacture the contacts used in its patent-pending EZ Lite Remote™ electric ignition system. This battery-powered unit allows personnel who weld cables for grounding installations – such as office buildings, utilities, and telecom installations – to ignite pre-packaged weld metals remotely from up to six feet away from the exothermic reaction that briefly reaches 3,000 degrees Fahrenheit.

Although the EZ Lite Remote™ system is becoming increasingly popular, thermOweld® (a division of Continental Industries Inc.) used the fourslide process because it could produce an initially limited number of contacts in the material of choice very quickly and affordably for first production phases. "The tooling was affordable, and appropriate for our volumes," explains Troy Geren, thermOweld® product development manager. "The product was introduced to the market recently, so it be will some time before we reach higher volumes. But economies of scale are not a factor in this situation, because this is not the type of product that will be sold in high volumes where progressive stamping dies would be necessary.

"It is astounding that Fourslide can hold tolerances the way they have," Geren adds. "They tin-plate the products before they ship to us. The fact that we can literally pull the products right out of the box and install them is important to us. We certainly don't want to get a part that we have to perform some operation on it before we can use it."

Not only is communication more convenient with domestic fourslide suppliers, but tooling changes are quicker and response time is normally much faster for design alterations, prototypes, and first article samples.

In another electronic application, Visionary Lighting (Annapolis, Maryland) used Fourslide Spring and Stamping to supply phosphor-bronze contacts for a custom, LED-illuminated display tray that mounts to vertical shelf brackets used in retail outlets, such as drugstores. Visionary Lighting is a designer and contractor for providing LED and Edgewood edge-lit acrylic illumination to cosmetics and point-of-purchase firms.

"I chose Fourslide for a number of reasons," explains Bob Krohn, president. "They were very knowledgeable about the parts I needed, and how to fabricate them efficiently. We have worked with overseas vendors in the past, and it has not been easy. Having a local vendor proved to be very assuring, and our comfort level with Fourslide has been much higher. Typically, when you run into a problem working with an overseas vendor, not only does communication become a challenge, but the time and transit involved can be a huge barrier. Fourslide, on the other hand, provided us with quick turnaround. Samples took only about two weeks, and the first article about five weeks."

Ed Sullivan, based in Hermosa Beach, California, is a writer who specializes in medical, IT, and manufacturing technologies.